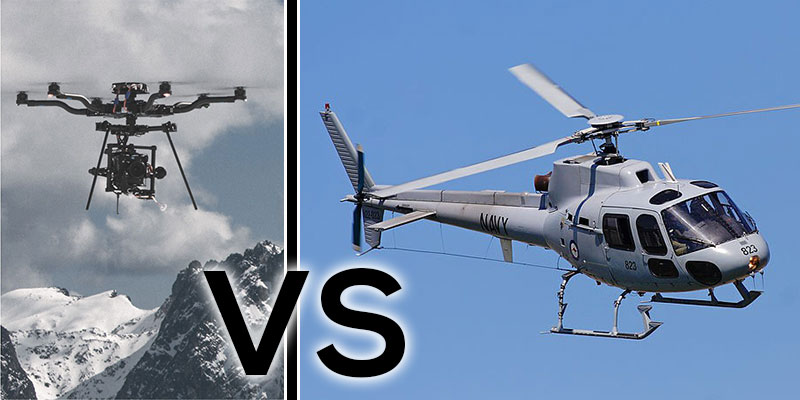 There is no doubting that both the Drone and Helicopter are both titans of cinematography, used regularly by filmmakers worldwide, producing some breathtaking footage. But which one tops the other?

There are many different uses for drones that include: cinematography, 3D surveys, thermal imaging, search and rescue and even police work. Drones are impacting not only the filming world, but many other secrets too.

Pricing- Hiring out a Drone is expensive for most people, but compared to dealing with any Helicopter hiring will feel like a bargain. The prices for helicopters are set by two components which are aircraft cost and insurance. The cheapest price goes for £900 per hour, if you are looking to use modes like the Robinson R44. Right from when the engine starts to the moment it shuts down you will be getting billed with the price of no less than £3,000.

Versatility- For obvious reasons Helicopters are incapable of getting into places that drones can. Places that are close to the ground, through trees and near structures. This will pose an obvious danger to a pilot of a helicopter.

Reshoots- These are made simple with a drone, as the director will usually watch via a monitor for a first person view shot, so there is never really a problem with getting the shot wrong. However with a Helicopter it will be a different story. Communication between director and camera operator is restricted and each new take can take considerably more time.

Refuelling- There are many factors to consider when using a helicopter. Any filming over a couple of hours will require a refuel. You will also need to consider the locations. Is it off road? Is it close to a landing zone? With a Drone you only need to do one thing, change batteries.

High Altitudes- Needing to film in large areas? A Helicopter is your best bet to capture panoramic shots of large cities, or events.

Vehicles- Helicopters carry a unique advantage for following vehicles, from behind, the side and in front. They can also show cars on a driving course or long winding road.

Distance- For a Drone, a quarter of a mile is usually the maximum it can fly before it starts to lag out. A helicopter can fly much greater distances, to the point of running out of fuel or cameras running out of battery life.

Drones are looking to shape the future of film making, not only in their own field but in the operations of helicopters too, such as search and rescue, police work, engineering and architectures. To completely dismiss helicopters would be unfair, as they do have their time to shine. Transportation services with a drone would prove difficult. They will always provide a key component for the emergency services and for heavy camera equipment. However as cameras get smaller and more powerful, this very well may change the outcome.